After ignoring pain signs through mid-November -- and, arguably, ignoring my calves and heels altogether since last spring -- I became "officially injured" on November 24th.  Since then -- over 5 weeks -- I've run a total of 30 miles -- most of which ran the gamut between "tight" or "sore" and bonafide pain in the left calf/heel.

I've been stuck in a cycle of "It hurts, it feels a little better, let's run a little*, it hurts...", from which I've yet to emerge.  As a runner, coach and physical therapist, it's downright embarrassing.  Here's where I've gone -- sometimes right, sometimes wrongly.

(*a little = as little as four minutes, a maximum of 18 minutes.  Never longer than 7 minutes consecutive, over the past month)

My treatment approach has been thus:

1. Do Nothing. Irritated muscles get overly-irritated by excessive stretching, strengthening, massaging and attempts at running.  So do nothing!  Well, this did not work.  I had a severely dysfunctional muscle -- so bound up by thousands of miles of running since last spring that my lower leg was one big grisley chunk of tissue, not a smooth supple muscle-tendon.  Every attempt to run on this clunker resulted in a straining on the same weak segment that gave way to begin with.

2. Tissue Remodeling.  My boss Jeff began to intervene around 12/8 -- pointing out that I had to remodel that healing, dysfunctional tissue.  According to the Tissue Healing Model, all tissues heal with fresh collagen fibers that grow irregularly -- into a jumbled mass, rather than organized fibers.  It's up to ME to "re-organize them" -- via stretching, massage, and occasional "challenges" to the tissue -- strengthenen, hopping/light plyometrics, and yes, running.

So that's what I did: three terrific professional massages that clearly pointed out how incredibly dysfunctional BOTH calves were, along with a regular regimen of stretching and hopping.

The problem: BALANCE.  Some days -- more often than not -- I over-did it.  Soreness crept into a session (usually running), then persisted.  And with soreness came favoring -- or BABYING, as I'll call it: me -- either consciously or unconsciously favoring the left leg in EVERYTHING -- standing, walking, and most definitely running.

Which brings me to the third progression in the treatment:

3. SYMMETRY.  I met on Christmas Eve with my boss at work (for our under-the-table "coaching for treatment" scheme!) so he could work with me.  What he found: egregious favoring of my left leg, with walking, squatting, heel raises, and hopping.  Ridiculous!

Our focus NOW is on equal firing of the left leg.  And here's why that's important: A poorly-activated muscle is a weak muscle.

Muscles are NOT all-or-nothing.  Their degree of strength depends on the number of "motor units" activated.  A motor unit represents one nerve fiber that innervates a collection of muscle cells, or a "bundle" -- of which there are hundreds if not thousands per muscle).  This is a requirement of life -- otherwise our physical response could not vary.  Ever lift a very light object that you thought was heavy (with any ensuing comedy?).

For something as "challenging" to tissue as running -- the constant hyper-loading -> storing -> and releasing of energy that goes into every stride -- you have to have FULL motor recruitment -- or ALL the motor units being activated (to some extent) in your legs.  This is doubly important if you're dealing with a muscle-tendon unit that lacks full strength and resilience.

A weak muscle-tendon needs 100% full power, otherwise the pounding forces with excessively strain, resulting in more injury.  BUT, if one is tentative, guarding, or "babying", you're telling your brain to DE-ACTIVATE, thus giving LESS power.  The muscle-tendon is now weakened further!

The answer: Go Hard, or don't go at all.  You either make that leap with 100% confidence -- and with it, full muscle-activation, without fear of pain -- or you'll land flat on your face.

And that's where I find myself, for the time being.
Posted by -OOJoe at 3:18 PM No comments:

Welcome to my Page!  For Coaching Information, click HERE or on the tabs at the top of the page.


*****
November, and the aftermath of my first ultra on 10/30, has gone by quickly.  The restful weeks following the 50M went quickly and easily -- as I've been busy with work, education courses, and coaching.

Initially, I was far less sore after Autumn Leaves than Twin Cities -- no hobbling or aberrant stair-stepping. If anything, my only soreness was due to my own mechanical flaws -- overloading the left side, lacking push-off on the right, and chronic under-pronation on the right side.  I had some left lateral knee soreness for about a week, then a touch of heel pain on both sides for another week.

My college coach, friend/mentor and distance running mega-guru Sean Hartnett has a saying, "Mind the Exit Wound".  In other words, be mindful of not just the initial soreness, but the lingering after-effects of a hard race or workout and how they can affect your body.

I did not heed this advice as I should have; the left heel pain, which I thought might've been lumbopelvic or ankle joint referred pain, turned out to be a significant musculo-tendinous strain.  It took a good two weeks of "barking" -- and pain escalation -- to make that clear.  And since then, I've run only twice in the past two weeks.  It's improving, but SLOWLY.

It IS irritating, though: I should've been wiser.  I THRASHED my calves at Twin Cities (my left worse than the right), then did not sufficiently work them out prior to Autumn Leaves.  Then, when Lefty began barking, mid-November, I ignored it, thinking it was just "joint stiffness".  So, as it turns out, I've been pissing it off for a month.  It could take another week or more to heal sufficiently to begin training.

I have mixed feeling on this "win".  One one hand, winning a spot in the 2011 is a shot at achieving a lifetime goal of finishing an event I thought was completely impossible when I first heard of it.  I remember being at my mom's house in the summer of 2004, reading an article online about a Northern Minnesotan who was in the midst of a six-year streak of complete domination of an event I thought was "punishment for shoplifting in some countries".  Yet it intrigued me to the Nth Degree.  A ten mile trail run can be tough, but 100 miles?? 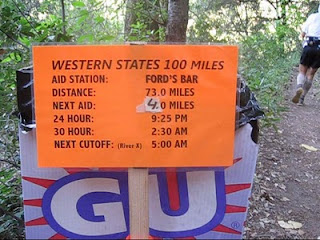 On the other hand, I feel as though I haven't earned this spot -- I wish I was forced to win a Montrail Cup race in order to gain a WS100 berth, because that'd be more evidence that I was prepared and deserving of a spot in the "Boston Marathon of Ultras".

Back in 2004 I remember poring over the WS100 website and the participant guide -- the maps and pacing and crewing...  Since my pacing experience at the 2010 event, I've pored even more, nearly to the point of obsession.  Now that I'm IN FOR SURE -- I am equally excited and frightened.

Some thoughts:
I've been telling people that Ultra running combines three of my favorite things: running, the outdoors, and EATING.  So, if nothing else, I suppose I can try to eat $370 worth of Mountain Dew, M&Ms, brownies, and PB&J sandwiches, come June 25th! 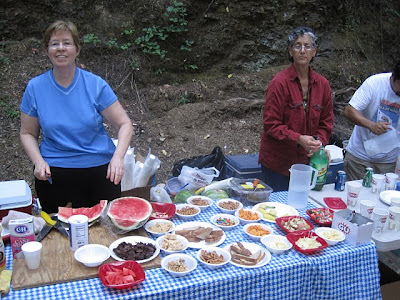